IGLOO SECURITY, Inc.  Now Has an

- Under the new slogan of ‘integration and intelligence’, the company has expanded ‘IGLOO SECURITY Integrated and Intelligent SOC (I² SOC​) at a new location 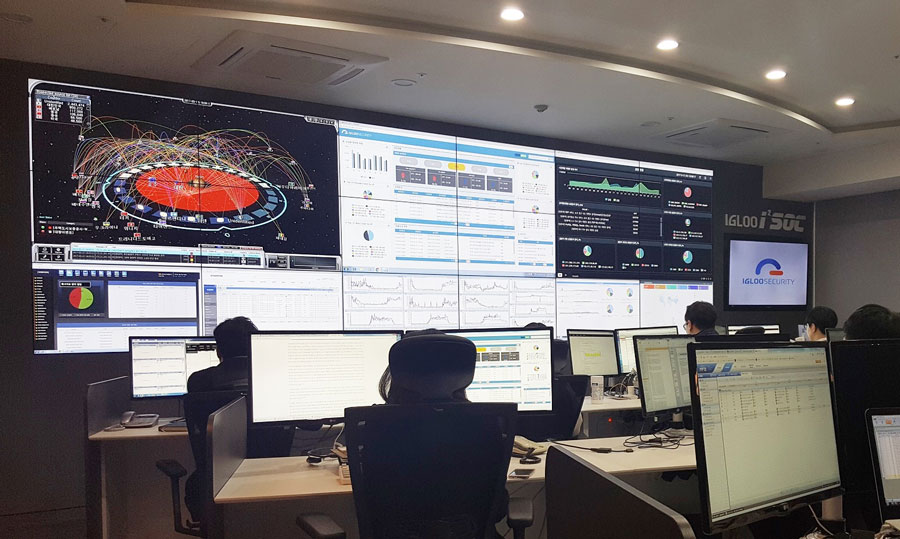 [Mar. 16, 2017] Under the new slogan of ‘integration and intelligence’, IGLOO SECURITY (CEO Lee Deuk choon), the leader of next-generation integrated security management, disclosed on Jul. 16 that the company moved IGLOO SECURITY Integrated and Intelligent SOC (I² SOC) to a larger space in Munjeong-dong in Songpa-gu. The relocation was designed to present a new security control strategy which could ensure an integrated utilization of the company’s vast know-how for security control and threat intelligence and thereby nimbly respond to ever upgrading cyber threats.

Analyzing in connection vast security data which is generated in and collected from different types of security systems on various sites, IGLOO SECURITY Integrated and Intelligent SOC (I² SOC) predicts threats and abnormal acts and promptly responds to them. For this purpose, IGLOO SECURITY registers an active response by breaking off links of an attack with an integrated security control system that organically combines the three elements of the big data-based ‘analysis platform’ which provides a wide-ranging visibility to the entire operations of a company, ‘the process’ which is tried and tested through security control service that has been provided for years, and ‘the professionals’ who owns profound experience and knowledge.

Moreover, for the purpose of ensuring more accurate detection and prompt response, the company will deploy a security control strategy which is focused on obtaining integrated visibility and automating security operations. The company will improve the user interface of SPiDER, an analysis platform, to make sure that security control experts can intuitively and quickly recognize issues and threat intelligence that have to be addressed with first priority. At the same time, the company will apply machine learning algorithm, which focuses its analysis on suspicious events and culls normal events among them through automated analysis so that the efficiency of analysis is improved.

CEO Lee Deuk choon of IGLOO SECURITY said, “As intelligent cyberattacks exponentially increase, the security control paradigm is shifting with a focus on ‘how accurately security threats are detected, and how fast one responds’. Now we have moved IGLOO SECURITY Intelligent Security Operation Center (I² SOC) to a large space in a new location, we will focus on delivering an advanced security control service which incorporates the company’s security skills and resources, know-how, and threat intelligence.”