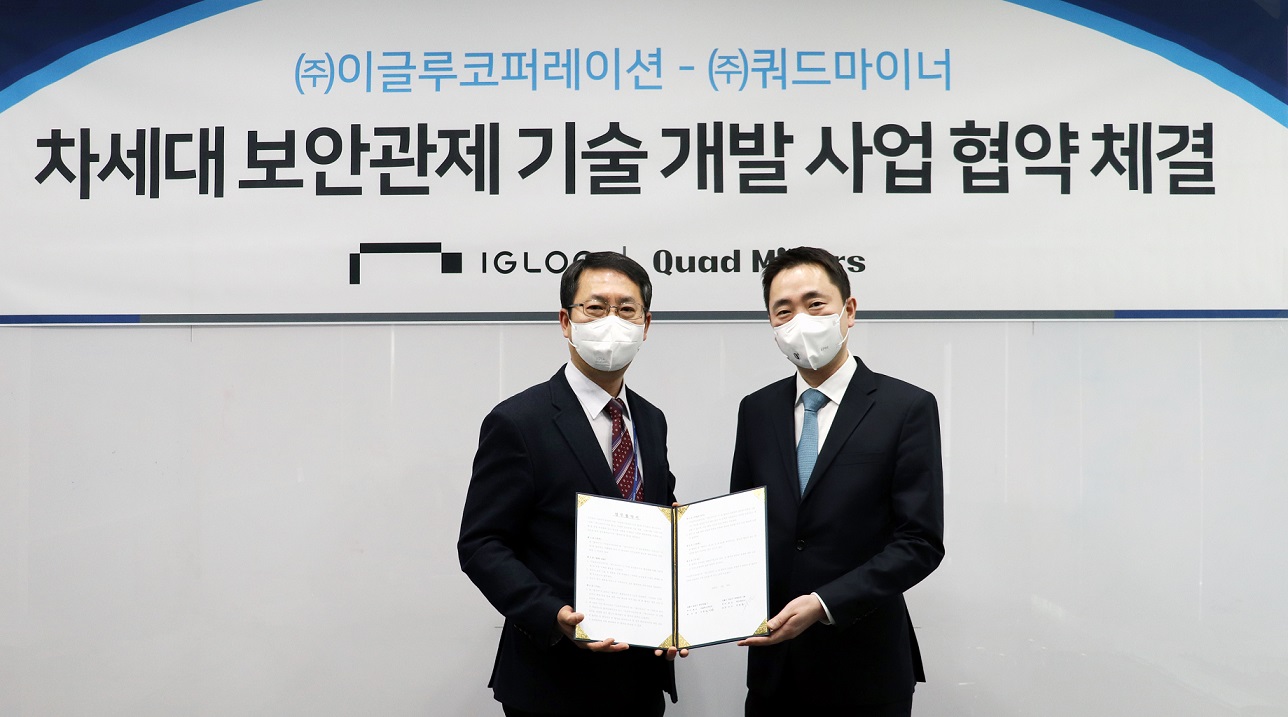 ​
[March 31, 2022] IGLOO Corporation is working with Quad miners to expand the next-generation security monitoring business. Security/intelligence company IGLOO Corporation (CEO Lee Deuk-choon, www.igloo.co.kr/en) collaborated with Quad miners (CEO Park Beom-joong and Hong Jae-wan, www.quaadminers.com), a network detection and response (NDR) company, to develop 'next-generation security monitoring technology‘. They announced that they had signed a business agreement for joint promotion of the business..
Since its establishment in 2017, Quad miners, made up of experts in the field of network security, has solidified its position in the network security market by introducing next-generation network security threat detection products that can collect and analyze all network traffic information in real time. After being listed in Gartner Report, a global IT market research firm three years after its founding, it has been recognized for its unique network full packet technology by supplying solutions to major public institutions and financial companies.
Starting with this business agreement, IGLOO Corporation and Quad miners will cooperate with each other to develop the next-generation security monitoring technology by linking the security technologies and products of the two companies. Based on IGLOO Corporation's integrated analysis of heterogeneous security events and Quad miners’ network know-how, it is accelerating the development of next-generation security monitoring technology with enhanced preemptive detection and response functions based on full packet analysis. In addition, they will organically cooperate in the development of another joint project that can utilize the technology of both companies.
Chang-seob Cho, Vice President of IGLOO Corporation, said, “After COVID-19, as the flexible work environment that can be accessed anytime, anywhere has been rapidly switched, the target and attack path that attackers can target have also become more diverse. Together with Quad miners, which possesses world-class network security technology, we will strengthen the threat detection and response function, further enhancing corporate security and business stability.”
Beom-joong Park, CEO of Quad miners, said, “With IGLOO Corporation, we are able to provide an expanded cybersecurity threat analysis and response (XDR) service to our customers. By consolidating the base technologies possessed by both companies, we will secure various references in Korean enterprises and overseas government and financial markets.”.
list