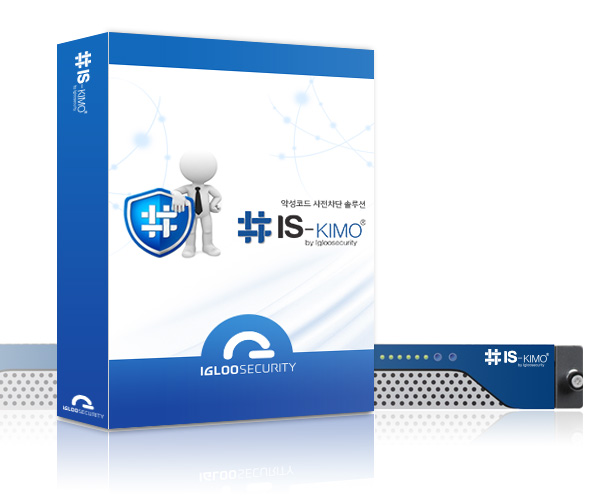 -  Block APT attack by detecting the weak points of software and application program beforehand.
-  Block the attack action itself on the weak point by using the action based detection technology.
-  Equip a dual engine with both surveillance engine and smart engine of real time execution.

[July 10, 2014] IGLOO SECURITY Inc, (C.E.O : Deuk-choon Lee), a leading company in the next generation integrated security management, announced that it released a Malware Proactive Prevention solution ‘IS-KIMO’ which effectively blocks the inflow of malignant code, which uses the weak point of software security.

Hereupon, IGLOO SECURITY, centered by the precedent technological research center, has developed a Malware Proactive Prevention solution, IS-KIMO, to overcome the limit of block method against the existing malignant codes and to offer customers the more strengthened security ability.

IS-KIMO has been developed based on the active defense concept so called ‘SAR (Stop-Analysis-Response)’. SAR at first stops the attack, analyzes the attack information, and responses to its analyzed result to increase a defense level up by transmitting the result to the other system.

As IS-KIMO is able to detect and block the weak point of commercial software and application program in domestic and overseas which are used for the spread path of malignant codes, it can block the inflow of malignant codes to user’s PC fundamentally.

Especially, IS-KIMO does not detect the malignant code with the existing signature type but through the action based detection technology, detects the attack action itself on the weak point of various software and application programs, and then blocks the attack. Therefore, it is able to defend up to the Zero-Day attack in real time, which is hard to block with the existing antivirus.

IS-KIMO not only can defend in real time by using a dual engine which is equipped with both surveillance engine and smart engine in real time execution, but also automatically detect the malignant HWP, PDF, and etc., which remain in PC. IS-KIMO also does not need an additional pattern DB update, and a user can apply various security policies easily by offering a convenient management environment.

IS-KIMO, which supports SAR strategy, blocks the attack by the attacker, analyzes the relevant information to transmit it to the other system like SIEM, and increases the defense level higher.

IS-KIMO is the product which has accomplished the end point security for the first time in IS CENTER of IGLOO SECURITY Next Generation Integrated Security Management Platform. As it interconnects with the existing IS-ESM, it is expected to create various synergy effects. Especially, according to the product installation, its resource occupation rate is also very low that it does not give a burden upon the user environment but also it supports all of English and Japanese languages to target the global market.

Dong-Woo KIM, the director in IGLOO SECURITY Precedent Technological Research Center, said, “In order to respond to the more intellectualized cyber attack effectively, it is necessary to change the existing response method more aggressively and actively.” He also said, “IS-KIMO, which reflects the 15 years of knowhow and experience by IGLOO SECURITY, will increase the security level of PC higher, which relies only upon the current antivirus.

In the mean time, IGLOO SECURITY Precedent Technological Research Center will continuously present various technologies and products, which reflect the new security paradigm, starting from the release of IS-KIMO. The detailed information about IS-KIMO can be found in http://www.igloosec.com/p/kimo_en.