Signed the Contract for Exclusive Distributorship with FUJITSU Group in Japan 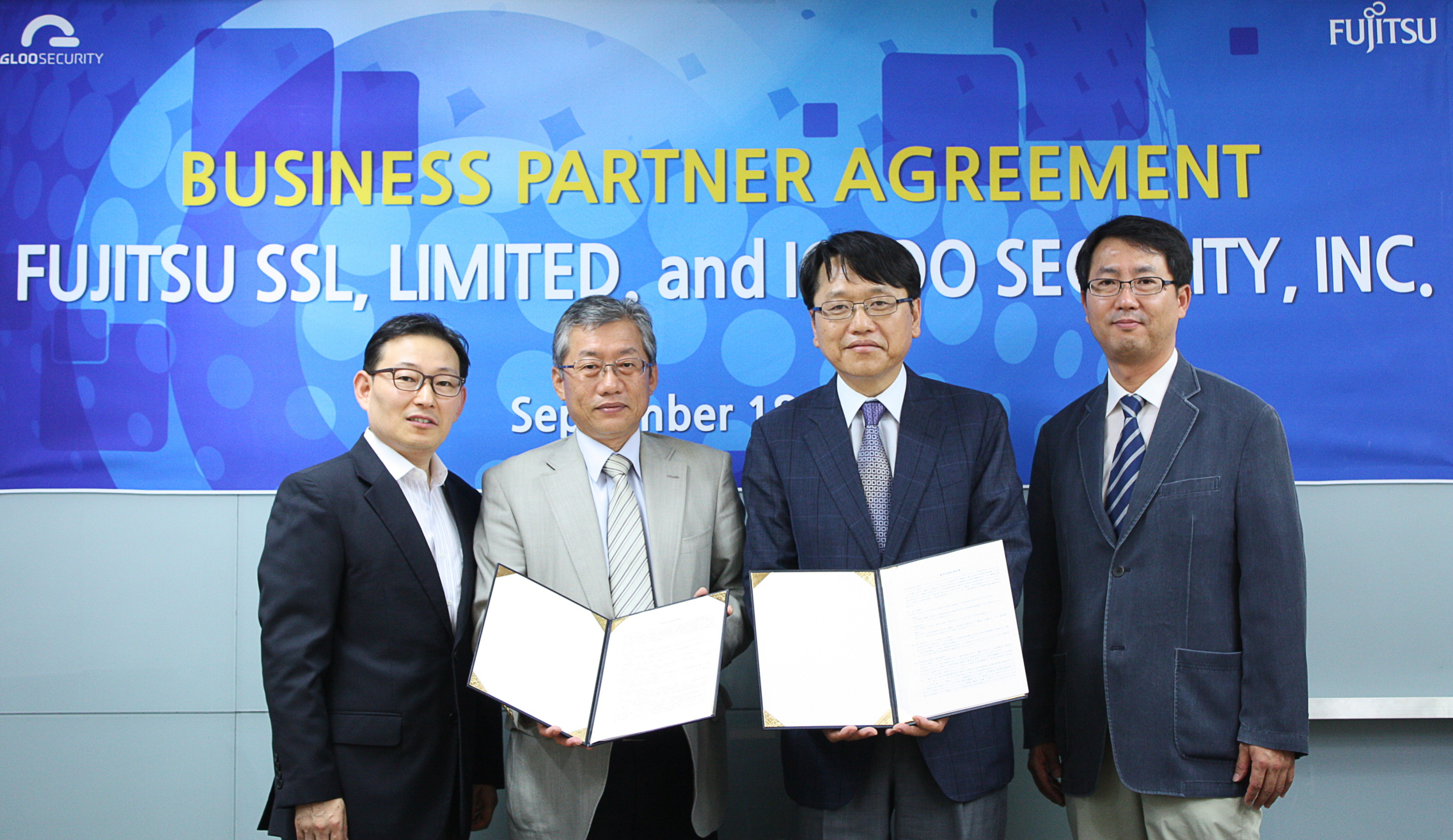 Signed the Contract for Exclusive Distributorship with FUJITSU Group in Japan

-  Signed the contract for the exclusive distributorship in Japan of Integrated Security Management Solution, IS-ESM
-  Shall receive the high evaluation for the IS-ESM product UI and the big data handling performance, the exact detection capability.
-  Shall discover new customers by utilizing the sale network and the abundant knowhow of FUJITSU

[September 19, 2014] IGLOO SECURITY Inc, (C.E.O : Deuk-choon Lee), a leading company in the next generation integrated security management, announced that the company had signed the contract for the exclusive distributorship in Japan of the integrated security management solution ‘IS-ESM’ with FUJITSU SSL (C.E.O Kawaguchi Hiroyuki) in FUJITSU group, Japan’s largest IT service company.

IS-ESM (formal SPiDER-TM) is the representative security product in domestic which has kept the first market share for 14 years since the integrated security management solution was released by IGLOO SECURITY in the past year 2000 for the first time in domestic.

Recently, IGLOO SECURITY has expanded its market by supplying IS-ESM to overseas markets such as Africa and Middle East. As we have made an exclusive distributorship contract with FUJITSU at this time, we have prepared the groundbreaking opportunity to target the markets in Japan. Especially, through this contract, we will be able to utilize the customer network and knowhow of FUJITSU who procures the customers such as many public institutions and large companies in Japan. We expect to discover new customers in Japan more easily in the future.

FUJITSU reviewed the products of integrated security management from various global companies. FUJITSU finally selected IS-ESM after it had evaluated highly on the excellent product UI and the big data handling performance, the exact detection capability of IS-ESM. Especially, in BMT (Bench Mark Test) conducted by FUJITSU, IS-ESM captured the first rank surpassing worldly renowned global companies. It has a great meaning in the point that it was the accomplishment achieved only with technological power overcoming the inferiority of brand recognition.

Since the establishment of branch office in Japan in 2010, IGLOO SECURITY, who has continuously targeted the Japanese market, has harvested the actual accomplishment such as the initiation of sales in Japan from the last year 2013. Especially, both product and service of IGLOO SECURITY have won the favor of Japanese customers, who are well known to be fastidious. In case of S company, which is the preeminent communication company in Japan, after they introduced IS-ESM, they have additionally introduced LIGER-1 that is the converged control solution, based on the high satisfaction and reliability upon the product. S company is now protecting the internal information assets safely through IS-ESM, and managing the data center of S company throughout Japan by utilizing LIGER-1.

A company, which is the preeminent security control company in Japan, is also offering the control service to about thirty Japanese companies based on IS-ESM of IGLOO SECURITY. Based on the stable service, they are receiving a good evaluation from customers.

Jeongjun Choi, the executive director in the branch office of IGLOO SECURITY in Japan, said, “This exclusive distributorship contract is the very meaningful accomplishment from the point that it is not just simply the level of procuring one overseas sale channel but that IS-ESM has received the acknowledgement in its technological power and performance from the largest IT service company in Japan. He also said, “As we have confirmed again the basic proposition that customers in overseas also emphasize the product’s performance and company’s reliability mostly, we will do our best to develop the innovative product and service which can satisfy the customers in Japan.”

In the mean time, since last 2013, IGLOO SECURITY has accomplished the exportation to many countries such as Japan and Middle East including Ethiopia. We accomplished the exportation of three million dollars in the last year only, connected with various exportation supports and localization strategy by KISIA and KOTRA. In this year, we will also maintain the existing strategy of strict localization and plan to promote the diversity of export product and export region actively.