“It was confirmed that your personal data has been leaked. The personal data that was leaked is as follows.” Late July, a huge security incident occurred in which personal information of 10.3 million members, which is 20% of the whole population, has been leaked from the internet shopping mall Interpark. The members of Interpark, thinking “Could it actually have happened?”, had to accept the fact that significant amount of personal information, such as telephone numbers and e-mail addresses, was leaked after checking Interpark’s messages.

According to the investigative results announced by ‘Private & Governmental Joint Investigation Group’ in late August, the attacker, who seemed to be from North Korea, penetrated into the company’s internal DB by sending a malicious e-mail to the employees of Interpark using Spear-Phishing. The attacker was hiding until he found the desired information, and finally showed up with the stolen personal information to attempt a financial dealing by asking for bitcoins worth KRW 3 billion to the Interpark.

What exactly was the problem for this incident? What is the reason security incident endlessly occur despite the investment and efforts by companies? Through the common problems of 3.20 cyberattack, KHNP hacking, and recently occurred Interpark personal information leakage incident, I would like to point out the fundamental problems, and try to find solutions.

Large Security Incident, What is the Problem?

There is a saying, “Nothing will come of nothing”. When there is a result, there is definitely a reason. Thus, there is a need to look at the cause so success will repeat and failure will not occur again. There is one common keyword that can be drawn from 3.20 cyberattack, KHNP hacking, and recently occurred Interpark personal information leakage incident. It is network partition. 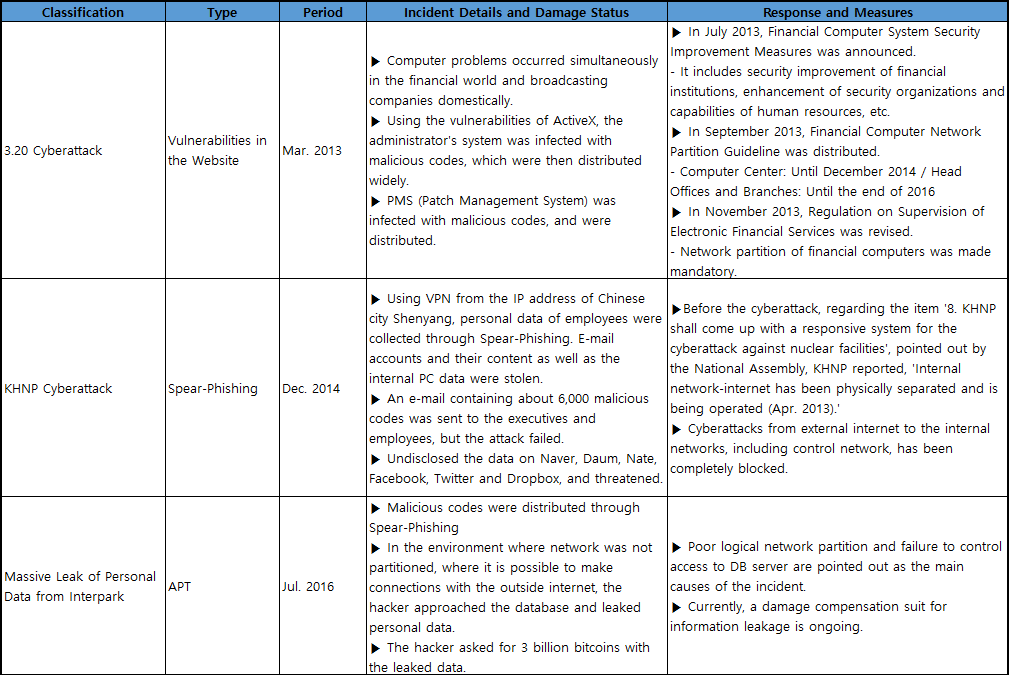 If you look at the 3 incidents in the

KHNP incident, which occurred afterwards, is another case that the importance of operating network partition has emerged. Even though the company network, internet, and nuclear power plant control network have been physically separated for operation, internal information was leaked due to one of the employee’s PCs being infected by malicious codes.

Furthermore, the recently occurred Interpark personal information leakage incident also has some kind of relation with the previously mentioned 2 incidents. It was pointed out that insufficient logical network partition was the fundamental cause of the incident. According to the analysis results of Interpark hacking incident announced by the Ministry of Science, ICT and Future Planning (MSIP), and Korea Communications Commission (KCC) on August 31, the attackers were after the fact that Interpark applies logical network partition, in which the corresponding server is virtualized, only when the database administrator (DBA) connects to the DB server containing personal information, and stole the information outside.

Types and Characteristics of Network Partition

Physical network partition is using one PC to connect to internet for external businesses, and the other for internal work without connecting to the internet, which has advantage of excellent security and safety. However, extra cost occurs due to constructing a separate network and the additional equipment such as PCs, and there is a concern that information can be leaked or be infected with malicious codes through secondary storage devices out of convenience or malicious intent.

Logical network partition dividing company network and internet with 1 PC has the advantage of being able to use existing equipment, but harder to manage compared to physical network partition. Server-based SBC method is a method to operate virtual PC at the server and the user connect to the PC as a client, so centralized management is possible, but the disadvantage is that since huge network traffic occurs, it takes budget to build server farm, and traffic load can occur. Furthermore, you need to take extra caution in firewall policy setup error or infection with malicious codes through terminal server storage.

Client-based CBC method is applying virtualization technology to the existing PC, so you can only use internet in the virtual region. Its characteristic is that cost could be minimized in building a network and introducing a new system compared to those of other methods. However, the PC environment differs for every user, so it is harder to manage, and when information is transferred between company network and internet, introduction of additional security solution is required.

Many companies think that if they apply network partition, they could be safe from security threats. If you introduce network partition, the security level of the companies does indeed get higher, but it does not mean that it is safe from all security threats. Various vulnerabilities could occur in the technological sector in building the environment as well as management and operation aspect where insiders are involved.

The security threat that can occur in the network partition environment can be roughly divided into 4 categories. First, the point of contact which inevitably occur due to the movement of data between company network and internet is abused as the path of attack.

For example, when security check was performed in the SBC-based network partition environment where the user can use the work environment through the virtualization server from the user’s local environment including the internet, a vulnerability has been found that work data in the virtual environment, which includes personal information, can be transferred to the user’s PC, which is connected to the internet, using shared directories or backdoor to go around the file transfer limit.

Second, handling exceptions regarding the data transfer between the networks is another factor that can cause security threat. Even after network separation environment has been built, due to the policy and work issues, the cases where exception handling is needed occur frequently. In this case, if the clear guidelines for transferring data in consideration of security level of data, and user authority have not been prepared, it might be possible that indiscriminate data transfer may occur. The main example of this is when the outsourced manpower transferred the data composed in the intra-network to the internet without any restrictions.

Safe Network Partition, How can We Achieve It?

First of all, sending and receiving data between company network and internet should be efficiently controlled. The companies should manage the log occurring when data are sent and received between the networks, and must thoroughly inspect whether the data are transferred from company network to outside according to appropriate approval procedure.

Furthermore, since movable storage media is frequently used for the convenience of the work, media control or data leak prevention solutions should be additionally introduced to restrict the actions that violate network partition security operation guidelines. In addition, when transferring data that require high level security to outside, it is desirable to minimize file transfers by making them receive approval from security officer or higher responsible officer.

In particular, PMS (Patch Management System), which manages the security updates of major infrastructures in a batch from the center, remains as a possibility to be abused as the path of the attack, so it is recommended that PMS be installed and operated for each network. In reality, when e-mails on the internet is moved to company network through the data transfer system between the networks, the malicious codes attached to the e-mails are frequently introduced to the company networks.

Furthermore, since various technology to go around network partition is actively being researched, it is necessary to prepare measures to minimize the damage from the attack by introducing security solution and executing recent security patch, which are compatible with network partition environment.

However, if you want to increase the effect of introducing network partition, you must be aware in advance that network partition is not a cure-all to solve all the security problems. Even if internet and internal network is separated, the work must be done by moving back and forth between the two networks, so there is always a possibility that a hole could occur in those points of contact. In other words, unlike the original intention to block intrusion from outside and prevent information leakage from inside, it could be abused as a path of attack.